To follow up briefly on my earlier post about the Calling Blighty films, they weren’t the only way in which people seperated by the war communicated via the cinema. Cinema organists also offered a vital connection between  troops serving overseas and their families sitting in the stalls of the Ritzy or the Essoldo back home. From around the middle of the war there was a revival of interest in cinema organ interludes. Odeon and Gaumont-British (both part of the Rank organisation by this time) initiated a policy of reviving organs, which had fallen into disuse across their circuits, and employed both resident organists and touring organ ‘stars’ to provide musical interludes between the films.[1] The pages of Kinematograph Weekly suggest that interludes were organised according to a range of weird and wonderful themes, not always very closely related to the main feature. At the Astoria, Finsbury Park, C. Burt Ritter offered an interlude conceived as a ‘biographical sketch’ of Betty Hutton (then appearing in Here Come the Waves (1944)).[2] John Lewis, the resident organist at the Granada in Greenford offered an interlude on the theme of ‘Highbrow or Lowbrow music: which do you prefer?’. Cyril Busfield at the Gaumont Palace, Chelsea offered an interlude constructed around songs with titles beginning with ‘S’. Andrew Fenner at the Gaumont Hammersmith went with the theme of ‘A policeman’s life in music’.[3] Often while the organist was playing, a Brenograph machine was used to create an atmospheric light and colour show, and perhaps this was the accompaniment to Jack Francis’s selection at the the Savoy, Hayes entitled ‘Songs in Colour’.[4]

The most popular format though, involved men serving abroad sending requests to their home cinemas, stipulating the regular day of the week that their loved one visited. Their dedication to wife or mum would be read out and then the song they’d chosen played on the organ. This format seems to have been pioneered by Maurice Cheepen and Rudy Lewis – the manager and resident organist of the Gaumont’s flagship cinema, the State, Kilburn. It quickly became popular in cinemas around the country – a popularity boosted when the BBC started broadcasting live from the State, Kilburn on the ‘Forces’ and the ‘Home’ service.[5] 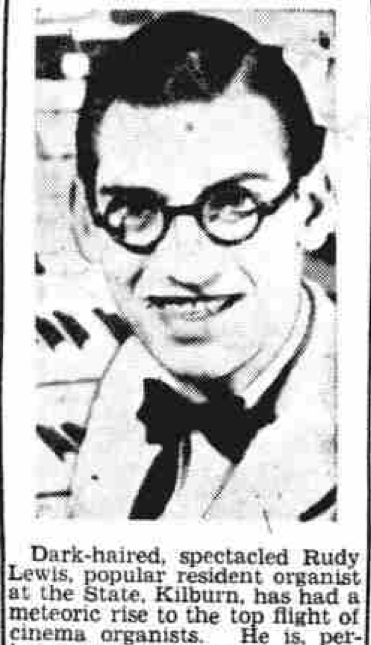 Like the Calling Blighty films, this was a one-way communication, but also like them, it offers a fascinating illustration of how cinema was central, not just to the personal lives of its patrons, but also to the public life of the community. What could be more personal than a message from a loved one, long missed, whose return was daily yearned for? And yet what could be more public than a message read out to a crowded auditorium of one’s neighbours? Cinema combined these hypnotic states as potently in the forces requests organ interludes as it did in the luscious close-ups and wish fulfilment fantasies of its feature films. And as peace approached, and the men started to return, those fantasies began to be fulfilled for individual and community alike. Kinematograph Weekly reports on one such show, featuring a request from Bill Martin serving in Burma for his mother sitting in the stalls of the State, Kilburn. His mother was in for a shock, for as the organ started playing, onto the stage walked Bill himself, lately demobbed, to be reunited with her in person. According to Kinematograph Weekly ‘the audience sprang to their feet and roared their heads off with joy’.[6]