Before the shit hit the fan and we were all confined to barracks, I attended a really inspiring and heart-warming event at the Museum of London. It was hosted by Film London and was rather gnomically called ‘Future-proofing Our Collections: Unleashing the Power of Archive Film’. Perhaps its purpose was better encapsulated by the suggested hashtag for the event: #ArchiveFilmPower, and boy! did we celebrate the power and the fascination of archive films from around the UK and beyond.

I don’t intend to give a comprehensive account of the event – you can read one here. But here’s a shoutout to Jack Reichhold of London’s Screen Archives, Clare Watson of MACE (the Media Archive for Central England), Gary Thomas of the British Council, Shane O’Sullivan of Archives for Education, Jake Berger of the BBC’s reminiscence initiative ‘remarc’ for their brilliant talks and the resources that they shared. You should totally check out these links, which lead to a whole universe of amazing archive material online for you to enjoy, and get inspired by, and build projects around. Shoutouts too to old friends and new including Jenny Hammerton of Movietone at Associated Press, Fiona Kelly of the Imperial War Museum, Storm Patterson of the BFI, and Jack & Clare (again) who told me about their own brilliant archiving projects over drinks at the end of the day. (More links for you to check out!)

Often when one goes to a film festival or event it’s not the headline themes that stand out as you come away, but a bizarre connection between the films that your brain has created for itself. You notice a thing, and then you notice it again and again in other films. I’ve already written about becoming obsessed with fireplaces once in Pordenone. I’ve come away from other events fascinated by the way people in silent films seem to light cigarettes and then toss the dead match onto the floor with no thought of the fireplace or waste paper basket. I’ve been gripped by drinking from saucers, red carnations, telephones and people identifying the late presence of rivals through the smell of cigarette smoke.

This time I became fascinated by the ways in which various of the films we saw included silent onlookers, and over the next few posts I hope to explain why.

The day started with the talks introducing London’s Screen Archives Network by Jack Reichhold and his colleagues. London’s Screen Archives is the regional film archive for London, but unlike institutions such as the East Anglian Film Archive or the Screen Archive South East, it isn’t a single institution – rather it’s a network of over 65 smaller organisations each of which have some small film holdings. They have a common catalogue which can be accessed here, where you can search for films from any London borough. They used to have a brilliant KinoVan which toured the capital, setting up in high streets and parks and street parties to show local films to local people. Jack hinted that a new version of the KinoVan might be back soon, but the real joy of the panel for me was the variety of films they showcased. This film of the Annual Sports Day for the staff of Platts Stores at Hounslow from 1912 stood out. It’s silent (but notice how you can select music to go with it by clicking on the link at the bottom of the thumbnail). The athletes in their moustachios, white vests and long flannel shorts, and the spectators all wearing straw boaters and with Queen Alexandra’s Roses on their lapels, remind me of the Chap Olympics, and later in the film there are some medieval-style jousting games which look both dangerous and hilarious. But the highlight and star of the film appears at 2mins 53secs in. This little boy in straw hat and sailor suit seems transfixed by the camera. He stands directly in front of the lens, gazing into it, and as the cameraman tries to pan around, taking in the scene beyond of the ladies selling their Queen Alexandra’s Day roses to a group of gentlemen, the boy steps sideways to move with it, so that no matter how the cameraman shifts from left to right, the child’s gazing face is always in the centre of the frame, like the cross hairs on a gun sight. Early cinema is, of course, full of examples of people looking into the lens, fascinated with the apparatus and the cameraman, as well as with the perhaps as yet unrealised notion of being recorded on the film. In the Lumieres’ 1895 film of the Photographic Congress Arriving at Lyon, the gentlemen disembarking from the boat pause to nod or lift their caps to the cameraman, and one even stops to take a photograph of the apparatus with his own enormous camera. In The Battle of the Somme (1916) the men crouching in the sunken road gaze with a mixture of exhaustion and fascination at Geoffrey Malins as he operates his camera – transfixed by this uncanny intrusion into their battlefield experience. In The Man With the Movie Camera (Vertov, 1928) one of the NEP ladies riding in a carriage which is being followed by not one, but two cameramen (the second filming the first filming her), imitates the gesture of cranking the handle of the camera as she gazes back into the lens (at 21.35 in this version).

In a later shot of the Hounslow sports day film itself, this more conventional interaction is also present. The camera pans across the crowd, each of whom laughs, tips their hat, smiles and gestures back to it as people do in family snaps, acknowledging the gaze of the lens, jostling to stay in shot a little longer as the camera swings around and displaying the good time they’re having – perhaps at the behest of the cameraman (the men washing cups at a tub certainly seem to have held their actions until the camera ‘discovers’ them, and earlier in the shot there is a cheer which is surely not impromptu). In each of these examples a contract has been made between the cameraman and the participants, even if only implicitly – the camera is recording the scene and they are of the scene. But the earlier shot of the little boy is of a different order. There doesn’t seem to be a contract here. The interaction between the child and the camera is arresting because it’s so unusual, and so uneasy. Does he realise he is being recorded? Does he understand he is ruining the shot as conventionally conceived? Is the cameraman shouting at him to get out of the way? His impassive close-up gaze is unnerving for the viewer too, because it draws the eye. It takes an effort of will to tear the eyes away from his face and look to see what is happening behind him – the scene of flirtation and charity purchasing that presumably the cameraman intends us to focus on. At one point the child turns around to glance at it himself, but soon returns unheeding to the primary object of his fascination – us. His presence seems to comment on the scene behind him. To say ‘that’s irrelevant stuff over there, not worthy of your attention. Look at me instead.’

The child is not the only person in the shot gazing into the camera with the intention of controlling what we look at. Among the mêlée of Alexandra Rose Day sellers in their white dresses and their besuited customers stands a tall man with a stick and spectacles who is smoking a cigarette. His gaze at the camera is not one of response and acknowledgement. It is more concentrated and evaluative. It is professional. Is he looking at the child so close to the camera and thinking about how this distraction can be diffused? As the camera swings from right to left of the scene in an apparent attempt to throw off the tenacious child, he stands precisely on the left hand frame line, as though delineating the extremity of the possible camera movement. Seeing one of the Rose Day sellers moving out of sight behind a knot of people to the right, he strides across, taps her on the shoulder and draws her into the empty space on the left where she finds a customer and transacts her business in much more satisfactory view of the camera, creating a meaningful reason for us to tear our attention away from the child. After this bit of business the tall man fades gradually and expertly into the background of the scene, still looking back at the camera to see how successful the blocking he has engineered is working. Evidently, like the men Vanessa Toulmin points out in the Mitchell & Kenyon films, this man is part of the filmmaking team, his job to firmly but discreetly ensure that the action of the day is tailored to the needs of the camera. The little boy remains a problem however, and it takes another man, emerging from behind the camera, to entice two of the rose sellers to come forward towards the camera for a final close up tableau – an operation that finally frightens off the little boy as they move into the foreground space he had exclusively reserved for himself. 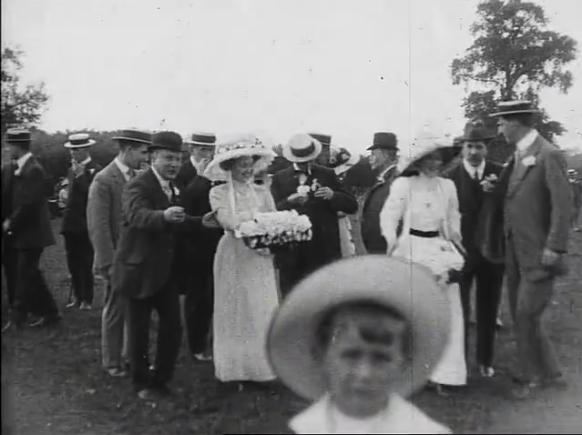