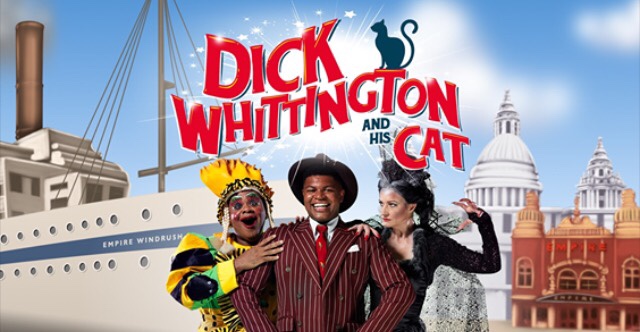 For my money, the pantomime at the Hackney Empire is the best in London. I’m not alone in that opinion. Ask any regular panto-goer and they will tell you the same. The Hackney Empire panto, written and directed by Susie McKenna since 1998, has ruled the London pantomime scene for almost two decades. While other pantos may be more lavish and spectacular, or more star studded, no other pantomime has as much heart, or is as consistently embedded within the community that it serves. It’s more than that though. Hackney is also technically the best. The singing is extraordinary and all of the performances are precise – the jokes land on target, the emotional registers hit home, the dance and fight sequences are exciting, the transformations catch the breath. Most importantly, (and it’s astonishing how many pantos fail in this) audience participation is given its proper status, with the early contracts from all the principals well established, properly rehearsed with the audience and reprieved meaningfully throughout the show. From Dick’s ‘Wha’ Appen London?’ to the Dame’s perennial ‘Coo-ee’ to the Cat’s ‘Wakey Wakey Uncle Vincent’, this is a panto that isn’t embarrassed to set up a relationship with the audience which pays dividends later on. Hackney doesn’t just offer traditional fare – the stories are updated and inflected to respond to the events of the past year. But it’s also not ashamed of its panto status either – so you can still rely on Fairy Bow Bells (Sue Kelvin) and Queen Rat (Annette McLaughlin) opening the show with a ding dong from their respective corners of the stage, not to mention a hilarious underwater ballet at the start of the second half. 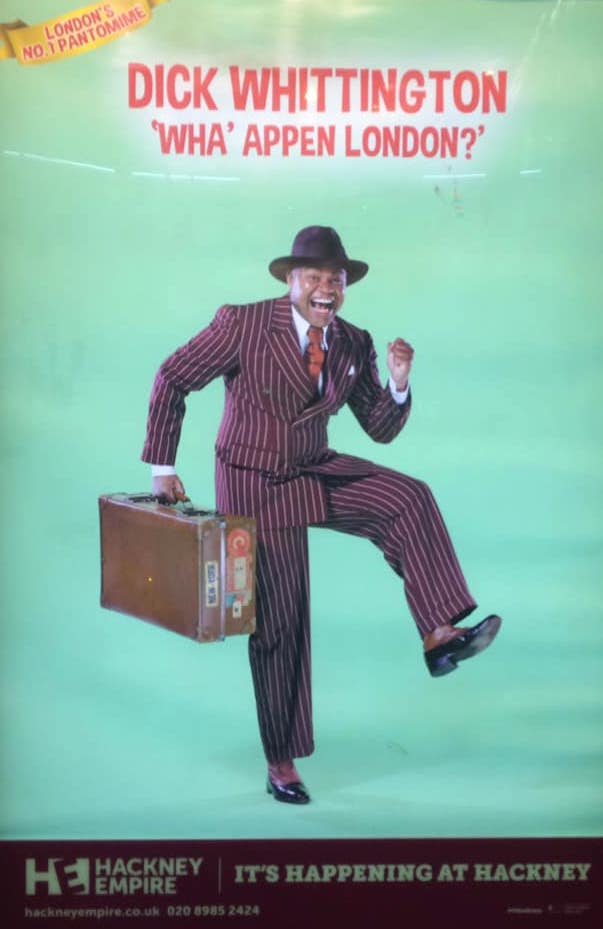 I’ve written before about how McKenna and her team have risen to the challenge presented by Brexit in recent years – not sitting on the fence and throwing out a few topical jokes as is the traditional response of the form, but actually building narratives that make clear arguments about the ways that the values we seek to instill in children, (of inclusiveness, fairness, generosity and understanding) also have a place in the national body politic. It’s all very well for Christopher Biggins and Anne Widdicombe to bleat on about keeping politics out of ‘the merriment of a children’s panto’ in the Sunday Express, but when the children in your audience and their communities are directly attacked and demonized by the prevailing political discourse then neutrality is a privilege you don’t have. Brexit, not surprisingly, has dominated proceedings in the past few years, but this year, with an election in progress, perhaps the situation has become too dire. ‘Don’t say the B-Word!’ admonishes Dick in the final scene and one realises with a jolt that despite several pointed allusions, the show has indeed not mentioned Brexit once. David Mayer observes of Regency pantomimes that ‘as the political situation became more acute, the pantomime retreated towards escapism’, and while there was no retreat from politics in this year’s Dick Whittington, there has definitely been a shift of tactic, and a turn to history.

The show opens in 1948. Dick (Tarinn Callender) and his cat (Kat B) are arriving at Tilbury from Jamaica aboard the Empire Windrush. Fairy Bow Bells has already announced his arrival in verse of course, from her customary spot to the stage right and he appears through a gauze at the bow of the boat, with a starry cloth behind him singing ‘To Dream the Impossible Dream’ – all bass and optimism. Queen Rat’s interruption sets the tone for what’s to follow. ‘He’s from another world’ she claims, ‘he doesn’t belong here.’ So the nostalgia for 1948, with the wide-shouldered suits, the calypso and boogie woogie numbers and the sense of pulling together to achieve the rebuilding of post-war London is tempered from the very start with an acknowledgement of the reception that the Windrush’s passengers actually received from some quarters. 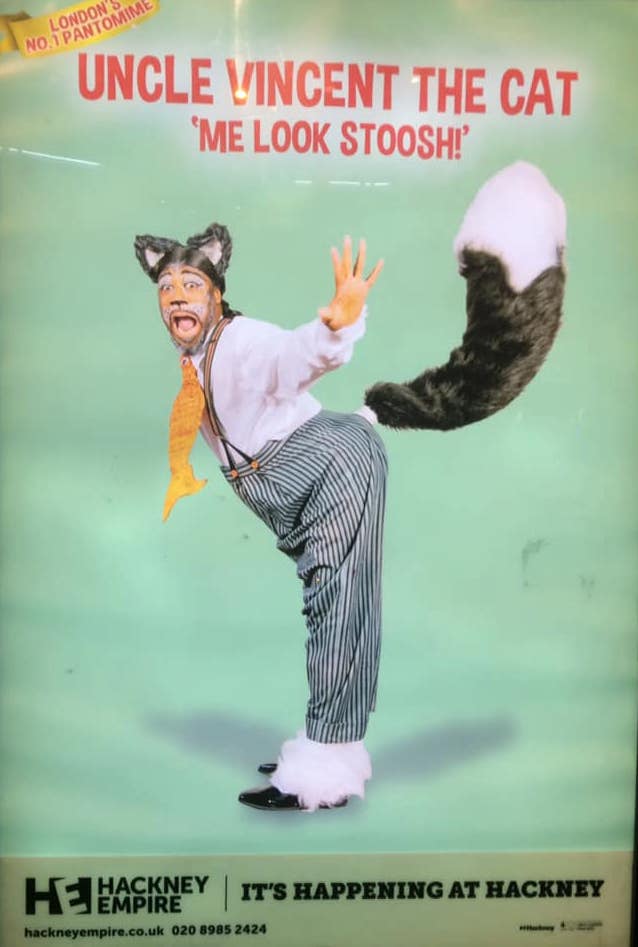 This isn’t some PC twist politicising a well-loved but otherwise anodyne tale though. Every version of Dick Whittington is at heart the story of an outsider who arrives to seek his fortune in London, only to be treated with suspicion and distrust by the locals, who too quickly believe the worst and banish him. It’s only through his good-hearted persistence and constancy that he wins over the hearts of those around him and is accepted as belonging to the town. ‘Turn Again Whittington’ the bells say in the pivotal scene on Hampstead Heath (one that always brings a tear to my eye) – have faith in your own ability to take your rightful place in the body politic. In our performance when Dick admitted on the heath that he’d ‘never really felt I was welcome here in the first place,’ a child in the audience spontaneously exclaimed, ‘oh nooo!’ in dismay. He spoke for us all, for whose heart could be stony enough to resist Tarinn Callender’s performance? Indeed in this scene Uncle Vincent (aka the cat) actually encourages the audience to join in with the chimes, singing ‘turn again Whittington, Lord Mayor of London’ so that it isn’t just the forces of magic that call Dick back to town – it’s the whole auditorium.

The singing is of West End quality. Not surprising when you have Clive Rowe as your Dame, and (fresh from Hamilton) Tarinn Callender as your Dick, joined by Annette McLaughlin as Queen Rat and Christina Tedders as Alice – all of whom have show-stopping numbers. I particularly liked Queen Rat’s defiant, ‘I’m a Bad Girl’ – a full production number with a chorus line of her dancing rat minions. Often in panto the love song is the cue for groans from the children in the audience, as Prince Charming struggles with a soppy number just a touch beyond his ability. There was none of that here. Against a glittering front cloth representing the Hackney Empire in a bombed out post-war street, Alice and Dick go for a stroll only to encounter funny looks from passers by. ‘Haven’t you seen the signs around?’ asks Alice, trying to name the racism they are facing – ‘No dogs, No Irish, No….’ But Dick interrupts her. He’s not going to let such concerns prevent him from declaring his love, and the duet of ‘Rewrite the Stars’ that follows is genuinely affecting. We were surrounded by Cub Scouts and something I’ve never experienced happened at this point – they didn’t groan. They sang along to the title phrase – a chorus of perilous sentimental soprano voices. Unexpectedly the heart lifts. Another favourite scene of mine was the underwater ballet – a triumph of simplicity in set design with a series of blue cloths and corals populated by shoals of fish and sea creatures. In the foreground a chorus line of little children as jellyfish bobbing about while Jemma Geanaus as Maia the Mermaid sings about life ‘Down in the Deep’. 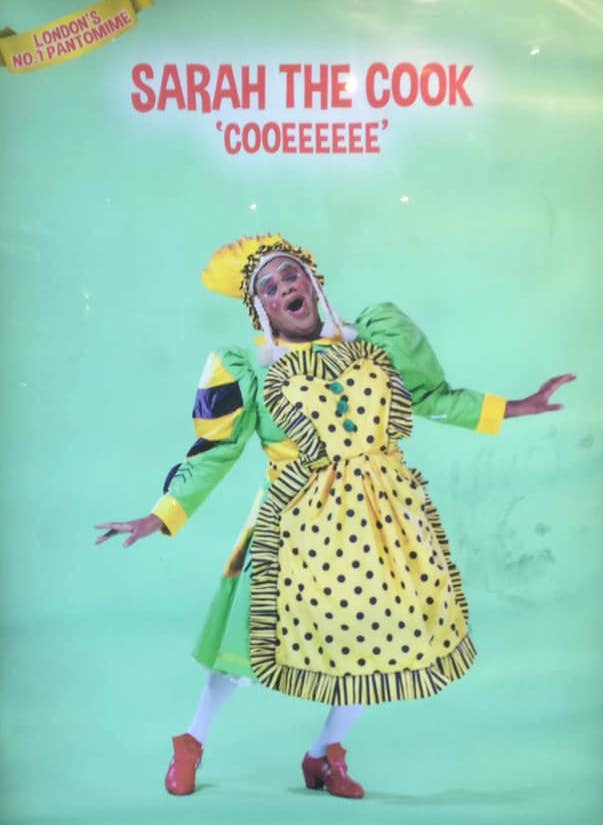 And then there was Clive Rowe’s Dame. What is it that one can say about that force of nature? Pantomimes come in all styles of course, and the emphasis is placed differently in every production. Some are driven by the clown – Danny Adams at Newcastle’s Theatre Royal for instance. Others are driven by a long-established team – Alan Stewart as the Dame, alongside Grant Scott as the villain and Andy Grey as the clown at the King’s in Edinburgh for instance. Others are driven by another character altogether – Julian Clary’s reign at the Palladium has seen him assuming a range of peripheral characters (Dandini, the Magic Mirror, the Spirit of the Bells) and making them central. Most, however, are driven by the Dame, and it is Rowe’s Sarah the Cook that is the beating heart, the internal combustion engine and the central dynamo of this pantomime. What is it that makes him so spectacular? There is the voice, of course – his singing is a miracle of control and abandon. His bravura performance of ‘And I am Telling You’ from Dreamgirls brilliantly guys the hysteria of that number, and perfectly nails the diva within the Dame. But it’s more than the voice. People often say, responding perhaps to a previous fashion for drag queens to take on dame roles, that the dame must always feel like a man in a frock. I’m not sure that’s quite right. Roy Hudd’s Mother Goose at Wilton’s a few years ago offered Roy Hudd in a frock and it was a little bit… unsatisfactory. Rowe’s Sarah the Cook is very much not Clive Rowe in a frock. He inhabits the role, and is completely believable as that larger than life, loving and generous, yet also perhaps rather overpowering lady. She’s come down from Oldham to welcome her son to England having been kept away from him for the duration of the war. Her hips and her lips are robust exaggerations of a mother’s affection, but at precise and controlled moments she becomes… a bloke. Perhaps this is most effective in the inevitable moment during her introductory scene when she spies a man in the audience and hones in on him with frightening focus. In our performance the victim was an (inevitably) bald twenty-something called Frazer. ‘Ooooh what a lovely head – can I touch it?’ cooed Rowe as Sarah, stroking his shiny dome. ‘And who does the cooking in your home?’ Frazer shares it with his girlfriend it turns out. ‘And what’s your favourite dish?’ pressed Sarah. Fried chicken it seems. ‘Ooooh well, you can have a nibble on one of my wings later on…’ Frazer, growing in confidence, admits that he prefers a leg. Quick as a flash Sarah is gone and and a burley bloke in a frock is large as life before us. ‘Listen mate,’ warns Rowe, ‘I make the jokes around here!’

Pantomimes, really, are review-proof. Families return again and again to their local theatre regardless. And traditionally reviews of pantomimes are pretty dire – either breathless in their ‘oh no he isn’t!’ bonhomie, or condescending in their only half concealed consciousness that the form is beneath the attention of the ‘serious’ critic. Well I love pantomimes. And I love the Hackney Empire most of all. I’ll try to write about some of the others I see in the weeks that follow. But I hope you’ll understand from this why the Hackney Empire rules London’s pantomime scene.

Book for Dick Whittington at the Hackney Empire here. 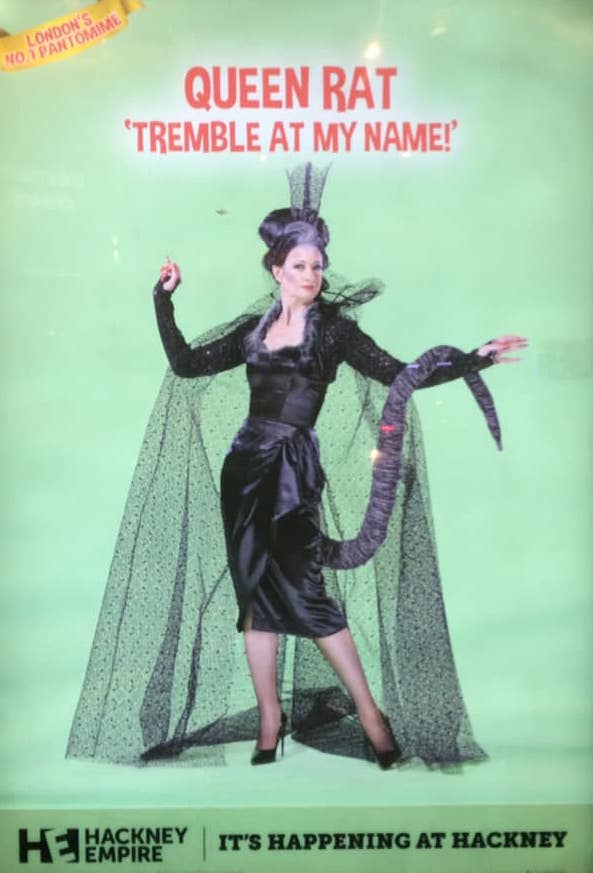